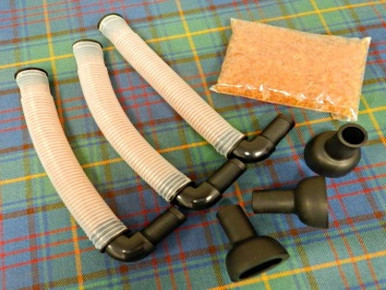 The Dri-Flo system has been designed by Craig Bannatyne and Willie McCallum and extensively tested and played at the highest level of piping, for over 2 years by Willie McCallum and Callum Beaumont, amongst others.
The system been used in differing levels of temperature and humidity in various parts of the globe during that time.  The system has won first prizes at every major solo piping competition in that time.
The Dri-Flo system consists of three tubes which are installed at the bottom of the drone stocks. Air passes through the tubes and moisture is removed by the drying gels (silica gel) before reaching the drone reeds. The drying gels absorb moisture and gradually change colour over a number of playing sessions. This color change will indicate when the gels require drying.
The tubes are installed by one of two methods. They can be hemped directly into the bottom of the drone stocks. The recommended method, however, is to install the rubber cups to the bottom of the stocks, where they fit neatly into the grooves. The tubes are then easily fitted and removed in and out of the rubber cups.
Major Features of the system include:
• Longer playing time, keeps drone reeds and drones dry.
• Excellent air flow to drones with unaffected drone volume.
• Light weight compared to other systems
• Easy visual check when gels need dried
• Starts and stops are straightforward with no valves
• Easy to install and remove
• Suitable for any climate
• Gels have 70% absorption giving longer playing time in between drying
Take a look at our blog about How Temperature, Moisture, and Storage Affects Your Bagpipes: https://www.jhiggins.net/blog/how-does-temperature-moisture-and-storage-affect-my-bagpipes/
• No dust particles
• Strong flexible hoses prevent collapsing
Instructions on how to dry gels:
1.  Remove the cap carefully and empty gels very carefully into a plate or jug that is heat resistant (e.g. Pyrex).  Placing a kitchen towel at the bottom will prevent the gels from ‘bouncing’ out and preventing loss.
2.  Remove the kitchen towel and place in an oven at 320 degrees fahrenheit (160°C) heating for 15-20 minutes. Ovens may vary.
3.  Gels should have returned to original orange. Remove and allow to cool. DO NOT TOUCH HOT GELS.
4.  When the gels have cooled, refill the tubes carefully using a paper funnel or jug
5.  The system is ready to be used again.
6.  If gels are dried out in a microwave this will cause the gels to break up which will lessen their effectiveness and unwanted particles may enter the bag.