Playing the Bagpipes with Other Instruments 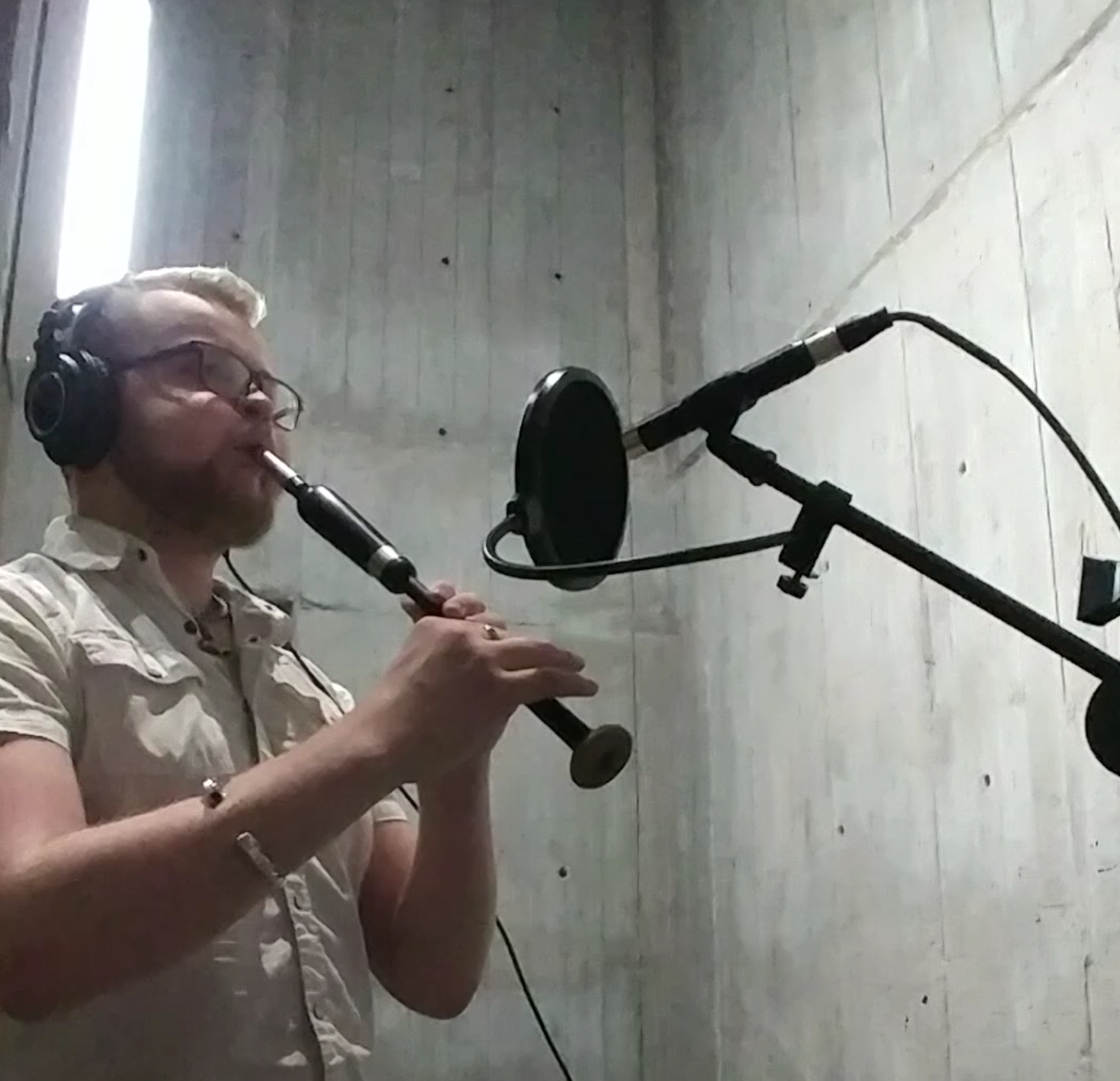 While the Great Highland Bagpipes are usually played by themselves or with percussion, it is also a refreshing change to hear them played with other instruments. In addition to the Highland Pipes, the Smallpipes and Folk Pipes are also great for playing in a group as they are quieter instruments that are tuned to concert A 440. Before we can get to setting up the pipes, lets look at the key and options of our instrument:

The sheet music for Highland Pipes is always written in A mixolydian (meaning that our G note is lowered and not a G sharp as it would be in A major), however we don't actually play in A as our sheet music suggests. The Highland Pipes' "A" is anywhere from 470 to 487 hz while a concert instrument like a piano tunes "A" at 440 hz. So our instrument is almost a whole step above "A" and is in fact somewhere between B and B flat on a normal scale. The first thing we have to do to tame the high pitch of our instrument is acquire a B flat chanter and reed.

These are much easier to settle into a defined key as they're made to play in A 440. The bellows blown smallpipes will sometimes have an "E" harmony drone which creates a lovely blend to the drones, however it can get in the way of tunes in the key of D like "Amazing Grace". For this, simply plug the E drone with a small cork. The folk pipes have no harmony drones so you won't need to worry about corking any off. Some smallpipes are also capable of playing in B flat, D and sometimes C. Since these aren't as in demand as the "A" pipes, they are more obscure and are only made by specific craftsmen.

This electronic version of our instrument is surprisingly more versatile and adaptable than the acoustic pipes. Depending on the brand and model, you can change the instrument in terms of pitch, volume, drone to chanter balance, drone tuning, alternate fingering, additional scales, and even different kinds of bagpipe sounds. With most of these, we're able to feed them into a speaker for amplification or even to record them via a sound cable to an audio interface. While the sound of these are sampled or digitally reproduced, they won't sound exactly like a live set, but are able to do more as an instrument. Many different models are out on the market today and all have different options for what they can do. Depending on your specific need and capabilities, an electronic bagpipe may be the best fit for you.

The best thing to have is a B flat pipe chanter or a B flat reed. McCallum, Shepherd, and G1 chanter options are available on our website in B Flat models. Having a B flat reed to suit a higher pitched chanter works well or, having a dedicated B flat chanter will also make the challenge easier. You'll want to either have a tuner on hand or a tone in B flat (pitch pipe, piano, sine wave) to help you adjust the low A to the correct pitch. For the best result, test in your pipes with the drones corked so you get the most accurate reading from your chanter. Since most pipers play with a slightly flat high "A" you may want to seat the reed in further to get it spot on as this could clash with other instruments also playing this note. Tuning tape is a must for this operation as you'll want to be able to adjust the chanter in any condition. I, personally, tune the low "A" just a tad sharp and use tape to flatten it back down to B Flat. Having that adjustability is crucial for fine tuning yourself with other instruments. The less you have to move the reed, the better. A small bit of tape on every hole allows for adjustment of every note.

Side note: You may find that you have to adjust your high and low G a tad sharper than normal since it won't mesh very well with other instruments who play the same note.

If you don't have a B flat chanter and reed, you might be able to experiment with seating the reed much farther out of the chanter and taping the holes quite a bit. The issue with this is that the reed won't be very stable when seated further out like that. The chanter will also be more likely to chirp and squeal on top hand grace notes with excessive amounts of tape. Over-taping will also lose the volume, resonance, and tone that your chanter previously produced. It is much better to have a dedicated chanter to use for playing in B flat.

Since our drones are set up to play at modern bagpipe pitch, we'll also have to tune them back down to B flat. There are two ways to do this. You can use drone/drone reed extenders to lengthen the bore or you can adjust your own reeds and manipulate them to sit at a lower pitch. External drone extenders are great since they require virtually no set up. The external model allows you to fit it into the ring cap of your drone and the reeds won't have to be touched at all. The internal model requires you to screw the piece into the place of your standard tuning screw. These internal extenders only work for MG and Ezee drone reeds. Without the use of drone extenders you might be able to set your own reeds to play at a lower pitch. You can seat the reed further out of the drone as well as lengthen the screw to balance the tuning better.

If you find yourself playing multiple performances with a B flat setup, you may find it easier to have another bagpipe that is totally dedicated to playing in this lower pitch. The effort is great when it comes to resetting your instrument to play at B flat and takes practice. A committed set might be a good way to make the challenge easier in addition to having a B flat chanter and drone extenders on hand.

Pipers usually play with drummers as they don't need to worry about the key of the tune. When it comes to melodic instruments, it becomes somewhat more complicated. Here are some common instruments that the pipes are often paired with:

An acoustic grand piano or pipe organ paired with the pipes is a great combination. You will definitely have to be in B flat for this pairing. Accordion or concertina players will also need to be played with a B flat instrument since they have no way to adjust their pitch. Electric keyboards and synths are somewhat easier. Some models allow you to automatically transpose and adjust the pitch to whatever the player desires. For this, you won't even need to adjust to B flat as the piano can tune to you. However the piano player will most always tell you to be in a specific key. (B flat)

Guitars and other Stringed Instruments:

Stringed instruments are a great addition to the sounds of the highland pipes. Guitars are fairly simple to get into tune with a B flat set of pipes. While it can be tuned sharper to play with a standard set of pipes, most players won't want to adjust their instrument to fit us as they can break strings. Depending on their tuning preference, a guitarist can also use a "capo" to change the key of their guitar. Electric guitar players might also be able to adjust their pitch via an effect pedal, which can affect the pitch of the instrument in small increments. Any kind of bowed instrument like a violin or cello is best suited with a B flat set. The makers of these instruments design the body and strings to play specific notes in standardized ranges. Making them adjust to us could prove problematic for their instrument. While these instruments might be able to push for the standard highland pipe pitch, B flat is probably best for this pairing.

The timbre of the Irish whistle or flute greatly compliments the highland pipes. Pipers who double as whistle players will often start with a tin whistle in the key of D. The highland pipes require whistles in E flat to blend the tuning. Both high and low E flat whistles would work. The E flat whistles will need to be transposed since B flat on the whistle is actually where the highland pipe "E note" would be. This means that the whistle can glide both above and below the highland pipe scale while playing a tune. B flat whistles would also work, however you would lose the crucial "low G" note as well as the rest of the natural whistle scale. The tuning of the whistle is mainly reliant on the temperature. Some whistles are made from a metal like steel or aluminum. They will likely be flat at the start of playing since they are cooler, but as they get warmed up, their pitch will rise to the appropriate note (like the highland pipes). Some whistles are also tunable, in which case, one might not need a B flat bagpipe to mesh the two instruments. Brass instruments like the trumpet or trombone are also a great pairing. Keep in mind that while our pipes get sharper as we play, the brass instruments will flatten with time. Brass instruments pair best with a B flat setup.

One of the biggest flaws with our instrument is the inability to adjust our volume. In the case of acoustic instruments like whistles, piano, and guitar, amplification by speaker is the simplest way to blend the mix. The pipes are overpowering for quiet instruments and won't be heard by a live audience without a microphone and speaker. For larger shows, every instrument (including the pipes) should be mic'ed and blended by a professional live sound mixer. One might also be able to experiment with chanter reeds and see if a quieter and more mellow sound is achievable. But the Highland pipes were not made to be a quiet instrument. For classical ensembles like an orchestra or a choir, a bagpipe can fit in this mix well. The dynamics and music for these groups is meant to be performed without the need for amplification. Some experimentation with positioning of the players might be needed to establish the best volume mix (position the piper(s) behind the strings or brass etc.). I've personally played with many different groups including folk bands, orchestras, choirs, and rock bands and every situation is slightly different in terms volume and mix adjustment.

The combination of pipes with other musicians is a refreshing change from typical pipe band or solo performances. You can bet that the attention will be on the piper during any mash-up of instruments. With some instances, you can get away with a standard pitched set of pipes, but it is almost always better to be in B flat where other instruments are comfortable. Playing live with others is a fantastic experience as well as recording. With the addition of Midi and digitized instruments, the options for new music and recording opportunities are virtually endless. Adding effects to the pipes and using them in a musically contemporary way keeps the innovation of our music moving forward. It is also entertaining for others to see the pipes used in a different way. Tasteful combinations with the pipes will continue to promote excitement and uphold the notable reputation of this ancient instrument.

Feel free to get in touch with us about any questions or comments!