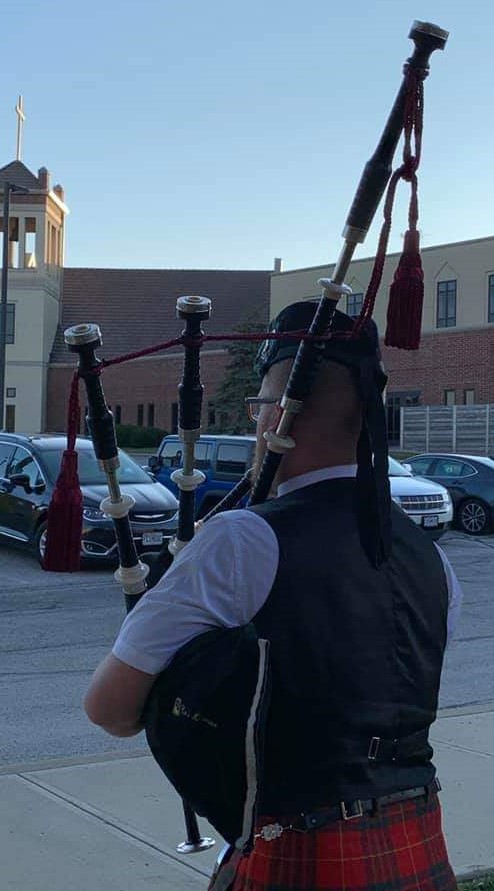 Existing today are many different kinds of equipment and supplies for the pipe band world. It's hard sometimes to distinguish what is needed and what is unnecessary to be able to produce good tone. It is surprising to see some of the world's top competitive bands using the bare minimum and sounding so tight and clean. A great deal of skill is involved in making your band sound good. There are, however, a few items that can really help improve your band's tone, stability, and ease of tuning:

This is perhaps one of the most important pieces of any pipe band's arsenal. This device is used for locking in the drones of a pipe corp to the same exact pitch. Using a tuner for chanters is not recommended as these should all be tuned by ear. The drones are tuned by calibrating the tuner to one, already tuned, set of drones and then going around the circle several times to lock in the tone. Many different styles of tuners are available from differing brands. Two common styles are: 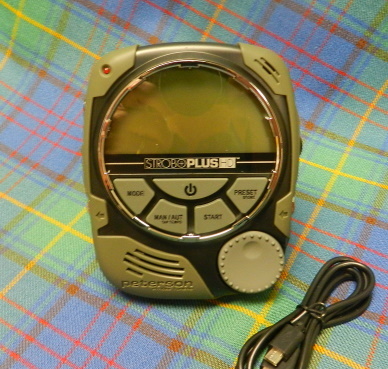 The strobe tuner is a popular model for drone tuning. The graphics of a strobe tuner tell the user exactly where to move the drone to make the two lines stand perfectly still. It offers a built in microphone as well as a port to plug in a hand-held microphone to better position it above the drones. This particular model also offers a rechargeable battery, perfect for tuning on the go. 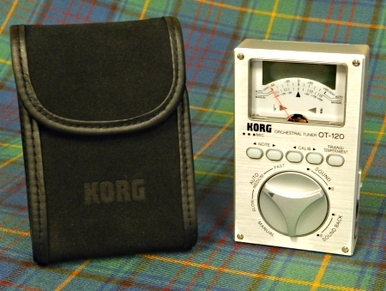 The needle-type tuner is a more traditional style tuner that operates using a needle aligned to the center of the meter when the drone is in tune. The needle moving toward the left means the drone is flat, and when it is toward the right, the drone is sharp. You can calibrate the tuner to sit at whatever pitch you want it to tune at. This model also offers a built in mic and a port for a hand-held mic.

Tuners shouldn't be used to pick up slack in the listening. There are times when the tuner won't work or the mics won't pick up the drones in a certain space. Always trust your ears. If it sounds good, then it's in tune. Having multiple meters on hand is also a smart idea, especially with multiple drone tuners. Ensure that they are all from the same brand so the consistency remains the same. 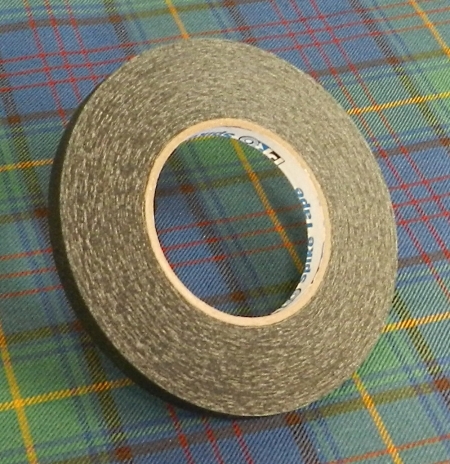 One thing is certain when tuning a band. If a note has no tape on it, your ability to adjust it is greatly halted. Every hole on every chanter for every player must have tape on it. If not actually covering the hole, you should have some in between the space above it so you can adjust it at a moment's notice. I even include extra pieces at the bottom of the chanter just in case one piece should start to slide in the middle of moving it. Taping is definitely an art. Players should have their tape all facing the same direction so the tuner doesn't have to go searching for the end of it. The tape should also overlap itself once as to prevent it from sliding around. Tape that is slanted across the face of the hole will never give an accurate pitch, so it is important that the tape is level across the hole. These small things make it easier for the tuner to adjust a note in the heat of the moment.

Having matched accessories will greatly help any pipe corp with the ease of tuning, stability, and consistent tone.

Listed below are the recommended items:

The purpose of this is to have the same tone and stability of the chanters between players. Having different chanters means that the proportions of the tape to match the tuning won't be the same. The unified tone is also a reason to have matched chanters. This means that you'll have a more defined and clear sound rather than a muddied sound with a mix of chanters. Having that kind of consistency with every player will help with stability. 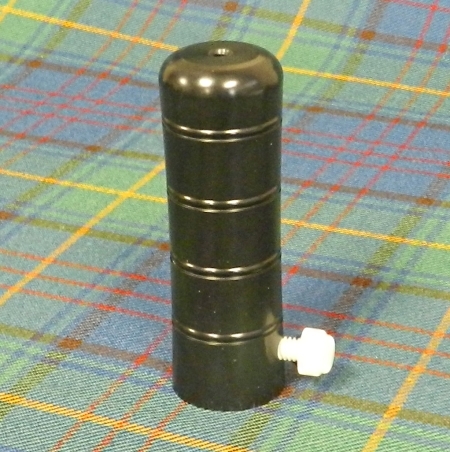 This is something that is often overlooked. When you have multiple players who use different methods to store their chanter reeds, the reeds won't react the same when they're first being played. The reed protectors affect the initial pitch, stabilization time, and sensitivity to changes in temperature and moisture. Models with a ventilation hole are recommended but there are also humidor style caps with controllable humidity and dryness levels dependent upon your region. As long as the players have the same style of reed protector, you'll be starting off your practice with consistent sounding chanters.

Another commonly matched item are reeds. Specifically chanter reeds. This is so that the reeds all behave and react in the same way. The chanter reeds are most important because they are the constantly changing variable that we're always chasing with our tuning. Again, having a unified tone to the chanters helps with the overall sound. Drone reeds can also be matched. This is less commonly done since different reeds will act differently in other sets of pipes. When done properly, this can be a great way to further lock in on the drone sound that you want and helps for ease of tuning.

This is more of a stability control than anything else but also has an impact on the sound of a player's pipes. Differing moisture control systems won't ever give you a stable tone to work with as the instruments will all be changing in different ways. We can't ever hope to fine tune a band that has some players with or without moisture control systems. The same goes for bags. A mixture of hide vs. synthetics causes the pipes to change based on their internal levels of moisture. Synthetic bags hold more moisture than a hide bag meaning that moisture will accumulate at a greater level in a synthetic bag. The hide is also a porous material which carries the vibrations of the reeds across the instrument, allowing for a bigger and more resonant tone. Having like bags in a pipe corps promotes a more stable sound where you know the behavior of every individual's instrument. 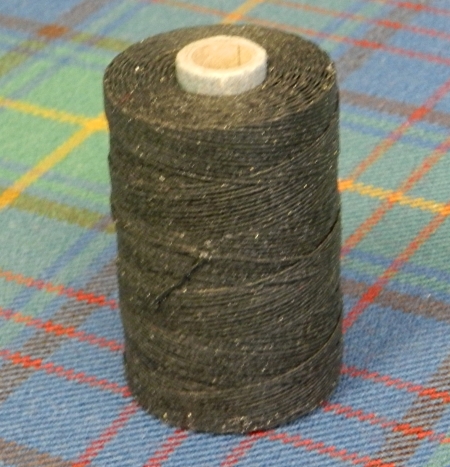 Having loose joints that move on their own or joints that're too tight and don't move at all just simply won't do. Every player has the resources to make sure their pipes are tunable and airtight. Having properly hemped joints on every set of pipes goes a long way for the drone tuner and/or pipe major. All too often, I see tuners who have to use two hands to move a drone top to get it into tune. The struggle is not only unnecessary, but wastes time in the speed of adjusting an entire band. The tuner should be able to move the drone up and down with one hand while using the other hand to hold the tuner. Waxed hemp is always recommended, you can even purchase unwaxed hemp and apply either cobbler's or bee's wax yourself. Some players use Teflon or "plumber's tape" on their tuning pins to aid the drone in turning. I think that Teflon is a great way to get a more accurate feel for the tuning rather than trying to move the drone like a slide whistle. The problem with this is that not all players use it in the same way. Teflon tape should be added over a layer of hemp and lightly stretched as it's being applied. The Teflon should be wound down the hemp tenon in the direction that you want the drone to tune. It should act like a screw: "lefty loosie, righty tighty". Every drone should tune and turn the same direction. While this can be a great way to aid to the ease of tuning, lots of people never use it properly. Players should all have the same hemping on their tuning pins.

In reality, very little is required for good pipe band tone. The true road to good sound is the individual's capability on the instrument, not through gadgets and gimmicks. These items are important to making the workload lighter for the tuning crew and to make sure the pipes are sounding their best. Every piper should have these items in their toolbox.

Feel free to get in touch with us about any questions or comments!